CNN) On Mother's Day, Cornelia Reynolds will remember her "only child, my best friend and my first true love."

Security footage shows her 8-year-old son, Gabriel Taye, falling unconscious at a Cincinnati school in an incident that may have led to the boy's suicide two days later, an attorney for his family said.Gabriel was found dead in January after he hanged himself with a necktie in his Cincinnati home, according to the attorney. 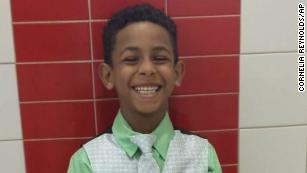 Gabriel Taye was found dead in his bedroom by his mother in January.After his death, a Cincinnati police homicide detective reviewed security video from the boy's school, Carson Elementary.In an email, the detective told school administrators he noticed an incident in a school bathroom before the boy died. The detective said he saw "bullying" and behavior that "could even rise to the level of criminal assault," according to a copy of an email obtained by CNN.The Cincinnati school district released the video Friday after media reports of the detective's email surfaced.School officials have said they decided to share the video with police even though the connection between the incident and the boy's death remains unclear.Hamilton County Coroner Lakshmi Sammarco announced Thursday that she is reopening the investigation into the circumstances and contributing factors around the boy's suicide in light of new evidence from the Cincinnati Police Department."I know they had possession of evidence that we didn't have. To us, there is new evidence, and we need to take a look at that," Sammarco told CNN, without elaborating on the nature of the new material.When Sammarco first learned of Taye's death in January, she was shocked that an 8-year-old would commit suicide. At first, she asked for his death to be investigated as a homicide, but the autopsy report ultimately concluded that Taye died from asphyxiation and the manner of death was, in fact, suicide, according to Sammarco."It was very hard for me to believe that an 8-year-old would even know what it means to commit suicide and so I asked Cincinnati police to treat this as a homicide until proven otherwise and investigate it fully," Sammarco said in a radio interview with CNN affiliate WCPO-TV.In a statement, the boy's mother said, "Gabriel was a shining light to everyone who knew and loved him. We miss him desperately and suffer everyday. His life was not only stolen from him, but from those of us who expected to watch him grow up and enjoy life. If I could, I would give anything to have him back."

What does the video show?

In the 24-minute-long video, Gabriel appears to be shaking hands with another boy in the entryway of a bathroom before he falls on the floor and lies motionless.Children walk by the boy and over this legs. Some seemingly inspect and poke him for about five minutes until an adult enters the bathroom.At least three adults enter the bathroom. They look at the boy, and some kneel down to get closer to him.Eventually, Gabriel stands up and leaves with the adults.

A case of bullying?

The homicide detective inspected the security video as a part of the Cincinnati police's investigation into Gabriel's death."I wanted to bring to your attention some things I saw in the video. I saw some concerning events in the video and I don't even have a child at the school," the detective wrote in the email to school administrators."I witnessed behavior that in my belief is bullying and could even rise to the level of criminal assault but due to the apparent age of the children involved, my current opinion is it could be better dealt with appropriately at the school level."No charges have been filed, officials said.The school district said it released the video reviewed by the detective in "an effort to be completely transparent."

Jennifer Branch, an attorney representing Gabriel's family, says she and Reynolds were not aware of the incident in the bathroom until recently. They believe it could have led to the boy's death."I am my son's voice and it will be heard," Reynolds said in the statement. "As Gabe's mother, it is my obligation to make sure that this will never happen again."Afterward, Gabriel was taken to the nurse's office, and his mom carried him to the hospital later that day when he began showing signs of nausea.At that point, accounts begin to diverge.Branch said the school told Reynolds that her son had fainted. There was no mention of what happened in the bathroom, Branch told CNN.But school officials said in a statement a school nurse called Reynolds to pick Gabriel up from school and take him to the hospital. The school's statement did not say what was wrong with the boy.Cincinnati Public Schools said its employees followed proper procedures."The school nurse checked Gabriel's vital signs, which were normal. She also contacted Gabriel's mother and asked her to pick him up and take him to the hospital to be checked out," the district said in a statement.Gabriel stayed home the day afterward and returned to school the following day. That afternoon, the boy's mother found him dead in his bedroom."On Mother's Day, please remember Cornelia and Gabe and give the people you love an extra hug in Gabe's memory," Branch said.

For a ‘small, sensitive little boy in a heavy boy’s body,’ life became too much